In 1933 Theodor Klaas, the father of the current company owner, Ludger Klaas, founds his construction company in the Westphalian town of Werne. He mainly constructs large buildings like schools and churches.

From the experience of years of heavy physical work in construction, the idea for the inclined lift is born. Theodor Klaas has this made in Werne out of U-rails with a capacity of 150 l.

On 1 January 1954 Theodor Klaas founds his construction machinery factory and develops his first inclined lift. This is presented with great success at the industrial fair in Hanover in April. 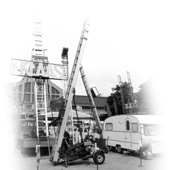 The steadily increasing sales of inclined lifts pushes the production site in Werne to its limits. A new plant is built 17 km away in Ascheberg and the company’s headquarters are relocated there.

After training to become an electrician, Ludger Klaas starts working at his father’s construction machinery factory. Vocational studies and military service leave him little time in the first few years for the company, to which he can fully devote himself again from 1973.

At the start of the 1970s the first inclined lift is made of aluminium with an extension length of 20 m. This is presented to a wide audience at various craft trade fairs.

In order to meet the rising demand for Klaas inclined lifts, the production area is expanded at the Ascheberg plant.

Klaas develops its first hydraulic inclined lift with an extension length of 34 m, thus making a significant mark in the market.

The Ziegelboy roof tile lift developed by Klaas creates a genuine revolution on the roof: the accessory made completely of aluminium saves roofers the arduous task of tile throwing on the roof – and hence time and personnel.

At the start of the 1990s Ludger Klaas starts to develop an aluminium crane. His idea: the quick and labour-saving transport of high loads on the building site and controlling the crane with a class 3 driving licence.

The first aluminium crane is built in this year, thus introducing a new era in the company’s history. The model, set up on a 7.5 t truck, already has a load capacity of 500 kg.

The aluminium crane presented just one year before manages to break into the market, thus ensuring full order books. As the current location has no room for expansion, the production site for aluminium cranes is moved to the opposite side of Raiffeisenstrasse. Klaas Alu-Kranbau GmbH is founded.

Besides the crane construction building, a new production facility for inclined lifts is built. These are continually developed to meet customer needs for more convenience, safety and reliability. 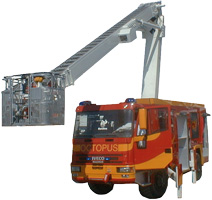 The company Iveco Magirus is looking for a partner to develop a new height rescue and extinguishing unit for fire engines. Thanks to its many years of experience in the construction of aluminium masts, the choice falls to Klaas. The first step into a new industry – firefighting technology – is thus taken.

A test tower is built on the company premises in Ascheberg.

After a three-year development and construction phase, the first Multistar (then still under the name Octopus) is delivered to China. This combination vehicle, the first of its kind worldwide, can be used both for extinguishing fires and saving people.

Crane sales are booming and the 1,000th Klaas crane leaves the factory.

Due to the high demand for Klaas appliances in the new German states, the Gera subsidiary opens in 2004.

Things are also happening at the company premises in Ascheberg: the existing garage for vehicles is extended and a separate external warehouse for accessories is built.

Klaas develops a new aluminium mast profile based on TS rails. This means the weight of the mast can be further reduced, while its strength and stability are increased.

A new service hall is built in Ascheberg for the repair and maintenance of customer appliances.

The TS profile, which has proven itself in practical terms, is now also used for the trainer cranes.

The company, which now employs 155 people, celebrates its 75th anniversary on 5 April.

Klaas extends its Germany-wide service network and opens subsidiaries in Tübingen and Wittenberg.

The 2,000th Klaas aluminium crane is sold at the start of the year.

In order to be close to customers in the north too, another service and hire station is opened in Hamburg.

A new product for fire protection technology is presented to the public: the Klaas AluFiver, a multifunctional elevating rescue vehicle. 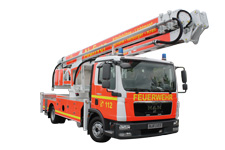 The senior management decides to build a new production hall covering 3,000 m², not least to reinforce the Ascheberg site.

A turbulent year: the company celebrates its 80-year anniversary, the delivery of the 3,000th crane and 20th birthday of the aluminium crane.

A service and hire station is also opened in the Munich area. In addition the Tübingen subsidiary moves into a new service building at a new site.

An innovative welding process is employed: the aluminium booms are produced in the stir welding method from now on, giving the booms even greater strength and stability.

Working with the Austrian company, Empl, an industrial firefighting vehicle is developed with a telescopic articulated mast and water gun.

The seventh Klaas service and hire station is opened in autumn. It is located in Bad Nenndorf near Hanover.

The Nuremberg subsidiary is founded as the eighth service station.

Klaas adds another product to its range: the Theo25 elevating work platform with a working height of 25 m is launched on the market.

A new office building for service and sales is completed and moved into in May.

Five Klaas AluFiver models are produced at the same time and delivered to Hanoi, the capital of Vietnam.

Almost at the same time, four new mobile cranes – three of which feature a hydraulic, telescopic fly jib – are launched on the market. New, memorable crane names are introduced with the new models.

The first Klaas crane with hybrid drive is built: a K27-32 RH. It can either be operated with an electric engine or using an auxiliary drive belonging to the truck engine.

Two more new appliances are coming onto the market: the Theo20, an elevating work platform with a working height of 20 m, plus the K850 RS, a mobile crane with a hook height of nearly 37 m.

Investment in the Ascheberg site: A new high-bay warehouse is being constructed. Up to 180 tonnes of aluminium can be stored in the 24.5-metre high tower – enough material for around 50 cranes.

In Kirchheimbolanden a plot of land measuring 3,300 sqm is being purchased. A new Klaas subsidiary for the Rhine-Main/Rhine-Neckar region is expected to be developed here. 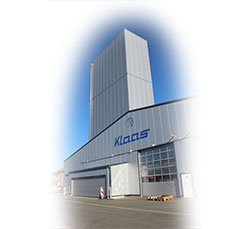 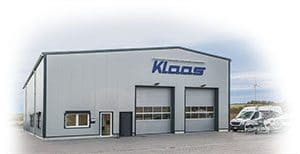 Several product developments will be presented at Dach + Holz in Cologne: a hybrid crane, the double telescopic fly jib and the prototype of a trailer crane with hydraulically extendable fly jib element.

The new Rhine-Main/Rhine-Neckar service station in Kirchheimbolanden commences operations on 1 October. Numerous visitors and guests of honour appear at the first in-house exhibition with official opening on 27 October.

A 12,700 m² site is purchased in the Ascheberger industrial estate North and construction of a new service hall begins. After completion, repair, maintenance and rental will be accommodated there.

25 new colleagues and six trainees will be hired. The three Klaas companies employ a total of 278 people at the end of the year.

The Ascheberg service station will move to the northern industrial estate at the beginning of March. Repair, maintenance and leasing are accommodated there.

At the end of the year, the 5,000th Klaas crane is produced in the Ascheberg factory. This underlines Klaas' number 1 position in the market.

Despite all the challenges posed by the corona virus, the product range can be expanded by three new crane models: With the K1100, Klaas will present the largest and most powerful aluminium crane currently available at the Dach + Holz trade fair in January. Its hook height is 60 m, the maximum lifting capacity 6 tons.
The entry-level models of the truck and trailer cranes will be fundamentally revised and launched on the market as the K700 and K280.
With the Rudi21, a new aerial work platform with additional jib is developed, and with the Theo20 FW, a further fire-fighting vehicle with extinguishing function.

We use cookies to ensure that we give you the best experience on our website.
accept more info